According to “BrandZ” that Apple is the most valuable brand. Apple has overtaken Google to become the world’s most valuable brand with an estimated brand value of more than $153bn thus Apple Ends Google’s Four-Year Run as Most Valuable Brand. iPad and iPhone are the product which pushed Apple ahead of Google.

Apple’s brand value is worth $153 billion, an increase of 84% compared to last year, whereas Google declined 2% in value to sit at $111 billion, with IBM close behind in third at a value of $100 billion. 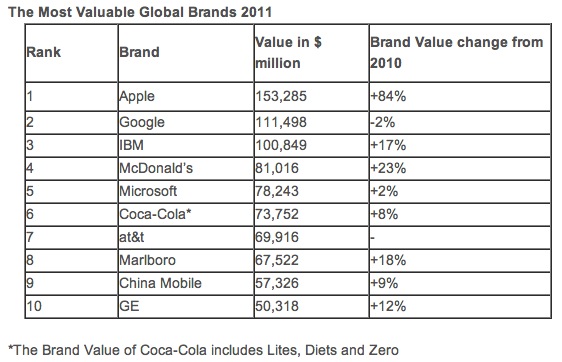 Peter Walshe, the director of Millward Brown behind the 6th annual BrandZ study had this to say on Apple’s surge:-

“Apple is breaking the rules in terms of its pricing model…It’s doing what luxury brands do, where the higher price the brand is, the more it seems to underpin and reinforce the desire…Obviously, it has to be allied to great products and a great experience, and Apple has nurtured that.”